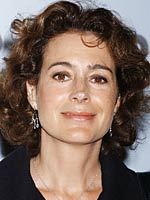 Actress Sean Young apparently had too much to drink, and not enough attention paid to her during the DGA awards Saturday night.

USA Today and Perez Hilton both report that the inebriated actress made a spectacle of herself, embarrassing the people at her table.

During the DGA Awards, where the five nominated feature film directors made a speech before the winner was announced, “The Diving Bell and the Butterfly” director Julian Schnabel was the last to speak.

Shortly after he took the podium, Young, seated near the stage, cut him off by shouting out, “Oh come on — get to it!”

Hilton’s sources say the actress was seated “at the same table as power couples Les Monves & Julie Chen and Steven Soderbergh & Jules Asner, who all tried to ignore her.”

“When she wasn’t yelling, Sean would stand up, put on her white fur coat and walk around her table and then retake her seat (while people were onstage accepting awards),” a shocked eyewitness tells Hilton.

Hilton’s source continues:  “She also licked the neck of her date (some grey haired dude who looked like a lawyer-type guy), screamed in French at French actress Marion Cotillard, and when cutie pie Kristen Chenoweth belted out a few bars to a song (encouraged by Carl Reiner) Sean started singing too.”

A shocked Schnabel searched the crowd to ask who was scolding him. When Young repeated “get to it!” Schnabel quickly wrapped up his speech, instructing Young to “have another drink, Honey,” and started to leave the stage.

But upon the audience’s insistence, Schnabel finished, and Young, stumbling in her white fur coat, was forcibly escorted out of the ballroom by two security guards, and at one point she fell to the floor.

Being in the room was an odd experience to say the least.  I’m sure you have heard by now the drama of the show….

An extremely drunk Sean Young heckled Julian Schnabel the moment he walked on stage to accept his medallion.  She was quickly 86’d by security and tried to throw a punch at those ejecting her from the venue.  She really ruined Julian’s moment and it was kind of sad.  He looked into the audience and said “Who said that?”  She blurted out something else unintelligible and then he said “Perhaps you’d like to finish my speech,” said “thank you very much” and started to step away from the podium.  He came back, of course, but it seemed he was visibly pissed and upset by the interruption.  Sort of sad, actually.  It’s like you get this big moment where you’re one of the 5 directors honored in a year and then some drunk ass wipe in the audience ruins a lifetime moment for you.