llan Melvin, a popular character actor who played Cpl. Henshaw on the classic 1950s sitcom “The Phil Silvers Show” and later portrayed Archie Bunker’s neighbor and friend Barney on “All in the Family,” has died. He was 84.

Melvin, who was in the original Broadway cast of “Stalag 17” in the early 1950s, died of cancer Thursday at his home in Brentwood, said his wife of 64 years, Amalia.

During his five-decade career, Melvin made guest appearances on numerous TV shows, including playing different roles on at least eight episodes of “The Andy Griffith Show” and playing Dick Van Dyke’s old Army buddy on “The Dick Van Dyke Show.” 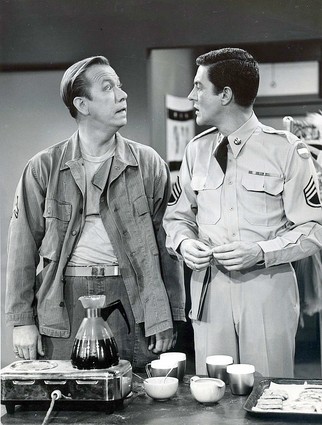 Melvin, who appeared in only one movie — the 1968 Doris Day comedy “With Six You Get Eggroll” — also did voice-over work in cartoons, including providing the voices of Magilla Gorilla and Bluto on “Popeye.”

He worked on numerous TV commercials as well, including playing Al the Plumber in the Liquid-Plumr commercials for 15 years.

After launching his show business career in the sound effects department of NBC radio in New York in 1944, Melvin began acting on radio soap operas and then moved into live television.

At the same time, he did movie star impressions in Manhattan in a nightclub act written by his friend Richard Condon, who later wrote “The Manchurian Candidate.”

He was playing Reed in “Stalag 17,” the hit 1951-52 Broadway play set in a German POW camp during World War II, when he first caught Silvers’ attention.

“He was brilliant” as Henshaw, Mickey Freeman, who played Pvt. Zimmerman on the show, told The Times on Friday.

In recent years, when fans would ask Freeman how many surviving cast members were left, he would reply, “Allan Melvin and me — that’s a high mortality rate for a noncombatant unit.”

Noting that Melvin “was a great mimic of voices,” Freeman recalled an episode in which an officer arrived at Ft. Baxter to stop the men from gambling. One of the ways the officer did that, Freeman said, was to make them listen to his wife lecture on art.

But the woman had an unusual twitch — pulling on her skirt — and Bilko and the other soldiers placed bets on how many times she would do that during her lecture.

Freeman recalled that Melvin, as Henshaw, was positioned outside the lecture hall with a microphone, broadcasting to the other soldiers on the base — ” ‘She’s up to 42 now . . . 43 . . . 44, and she’s not even breathing heavy.’ He made a whole racetrack thing out of it,” Freeman said. “He was wonderful.”

Melvin was born Feb. 18, 1923, in Kansas City, Mo. His family soon moved to New York City, where he graduated from Columbia University as a journalism major.

Melvin retired from acting about 10 years ago — long after becoming a household face who was used to people spotting him in public and saying, “Hey, Henshaw” or “Hey, Sam the Butcher.”

“I’ve enjoyed the stuff I’ve done,” he told People magazine in 1996, “but the one you’re getting paid for, that’s what you enjoy most.”

In addition to his wife, he is survived by a daughter, Jennifer Hanson; and a grandson.

One Response to Popular Actor Allan Melvin Dies at 84