You are here: Home » strange » Paul Karason – The Man With Blue Skin 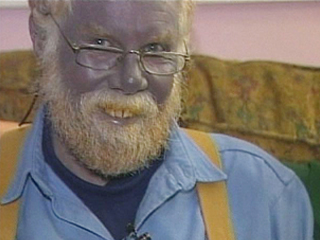 Paul Karason puts a whole new spin on “feeling blue.” For more than a decade, the 57-year-old has been living with a blue face.

Fourteen years ago, Karason developed a bad case of dermatitis, which results in swollen, reddened and itchy skin. He started self-medicating, using a treatment called colloidal silver, which is made by extracting silver from metal.

Often touted by manufacturers as a cure-all, colloidal silver usually is found in a liquid form. Looking for relief, Karason drank the concoction and rubbed it on his skin — something the U.S. Food and Drug Administration does not recommend.

“The change was so gradual that I didn’t perceive it and other people around me likewise,” said Karason. “It wasn’t until a friend I hadn’t seen in several months came by my parent’s place to see me and he asked me ‘what did you do?.'”

The FDA does not consider colloidal silver safe or effective to treat any disease or condition. In fact, taking it could have serious side effects, such as:

— Argyria — which is an irreversible blue-gray discoloration of your skin, nails and gums

— Seizures and other neurological problems

Karason, who recently moved from Oregon to Madera, Calif., said it hasn’t been easy living with blue skin.

“I do tend to avoid public places as much as I can,” he said.

Karason made the move in hopes of fitting in a little better.

“I hope that they just accept me,” he said, “And I think that will happen here. Where I was, I rather doubt it would have. This is different kind of community here.”

“The only time now I really think about it or notice it is if we’re out in public and people start staring,” she said.

So far, Karason hasn’t sought any medical attention for his condition. When he was asked if he’s still drinking the colloidal silver, he said yes, but much less.

5 Responses to Paul Karason – The Man With Blue Skin