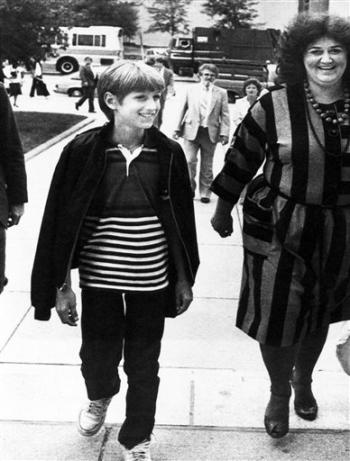 DES MOINES, Iowa (AP) — Republican presidential candidate Mike Huckabee’s 15-year-old comments that AIDS patients should have been isolated have so alarmed the mother of Ryan White, an Indiana teenager whose life-ending battle with AIDS in the 1980s engrossed the nation, that she has asked for a meeting.

“I would be very willing to meet with them,” the former Arkansas governor responded Tuesday while campaigning in western Iowa. “I would tell them we’ve come a long way in research, in treatment.”

The GOP front-runner in Iowa’s Jan. 3 caucuses stood by his 1992 comments in a broadcast interview Sunday, infuriating Jeanne White-Ginder, the late teen’s mother and a board member of the AIDS Institute.

“It’s so alarming to me,” she said in a telephone interview Monday with The Associated Press from her home in Leesburg, Fla.

“It’s very important to me that we don’t live in the darkness” when people thought AIDS was transmitted through casual contact, such as by “kissing, tears, sweat and saliva,” White-Ginder said. “We have to treat this disease like a disease, and like Ryan always said, not like a dirty word.”

White was 13 when he was diagnosed with AIDS in December 1984, having contracted the disease from the blood-clotting agent used to treat his hemophilia. He was barred from school the following year out of fear the disease was spread casually. He died in 1990 at age 18.

On Tuesday, the Human Rights Campaign, a gay rights group, and the AIDS Institute sent a letter to Huckabee asking him to meet with White-Ginder — who declined in the interview to say what political party she belongs to — and calling his comments “completely beyond comprehension.”

In response, Huckabee told reporters in Council Bluffs, Iowa: “I certainly never would want to say anything that would be hurtful to them or anyone else. I would have great regret and anxiety if I thought my comments were hurtful or in any way added to the already incredible pain that families have felt regardless of how they contracted AIDS.”

Once an underdog, Huckabee has come under increased scrutiny as he has soared to the front-running position in the important Iowa caucuses and elsewhere over the past few weeks. He’s faced criticism, in particular, for his comments on AIDS, and his records on parole, taxes and immigration in his decade as governor, and those issues were all but certain to be raised at a GOP debate in Iowa on Wednesday.

As a Senate candidate in 1992, Huckabee told the AP in a questionnaire that “we need to take steps that would isolate the carriers of this plague” if the federal government was going to deal with the spread of the disease effectively. “It is the first time in the history of civilization in which the carriers of a genuine plague have not been isolated from the general population, and in which this deadly disease for which there is no cure is being treated as a civil rights issue instead of the true health crisis it represents,” he said then.

In an interview on “Fox News Sunday,” Huckabee denied that those words were a call to quarantine the AIDS population, although he did not explain how else isolation would be achieved. “I didn’t say we should quarantine,” he said. The idea was not to “lock people up.”

Huckabee acknowledged the prevailing scientific view then, and since, that the virus that causes AIDS is not spread through casual contact, but said that was not certain.